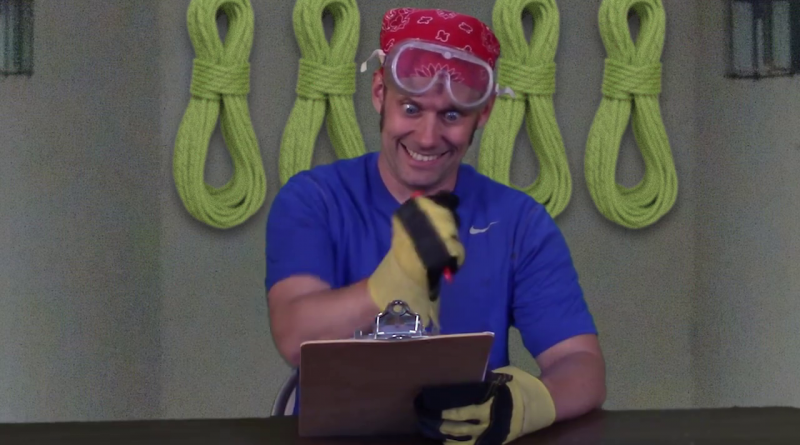 For a number of years I’ve worked on video projects designed to promote a Vacation Bible School event to a local audience through social media. The goal is to introduce the theme and the new special character who will be part of the upcoming event. The same person plays the character from year to year, so we get to have fun with one person doing scenes opposite themselves.

We are always working with very tight budgets and limited time availability for the various staff members who participate in the video. We also often have big ideas. So, the videos make heavy use of virtual sets and green screen.

Below is the actual script I wrote for the 2017 promotional video and the finished video that was created from it. There are some minor differences from script to screen, but the finished video is very close to the original idea. Small additions like the buzzer sound and big red X overlay that punctuates the failed job interviews help sell the joke and add a slapstick element for the kids when the main gag is more aimed at parents. But, the shooting script is critical to making sure that we get all the essential story elements as we work with each performer.

The video was shot with an inexpensive camcorder in a relatively small studio in front of 10×12 muslin green screen. The primary lighting was done with 2 Lowel Omni lights bounced off of silver umbrellas. Audio was recorded with an inexpensive lav mic wired to a Zoom H1 recorder. All of the backgrounds were created in Photoshop and the majority of the compositing work was done in Adobe Premiere (After Effects has a better tool set, but speed is essential to getting the project completed and staying inside Premiere keeps the project moving.) The music was performed on an old Yamaha keyboard (it has a floppy disk drive built in!!!) with the sound mix created in Adobe Premiere as well.

The final video is a bit rough around the edges. There was a production team of one and a post production team of one along with very tight schedules. Every shot was an effects shot, so we couldn’t spend the extra time to really refine the composites. Fortunately most people watch on their phones, so the visual issues aren’t as obvious as they would be on a larger screen.

Overall the video was very successful. It created a lot of social media interaction and helped boost the visibility of the event with people in the community.