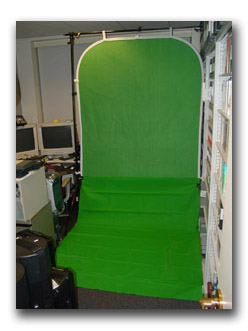 This is not the right way to shoot a green screen, but I needed to work in a hurry.

I found an opportunity to convince some business folks on the benefits of an in-house studio space with a built-in pre-lit green screen. I wanted to make sure the executives knew that we already had the technical capacity to shoot and composite green screen work, and that we only needed dedicated space to make an efficient system.

The photo shows my basic screen setup inside the office I use for my editing/equipment storage room. The main screen is a Photoflex Flexdrop collapsible blue/green screen. Since I needed to grab a full body shot, I clipped on the vinyl green screen that shipped with my copy of Serious Magic Visual Communicator StudioÂ (later purchased by Adobe and discontinued) to the bottom of the backdrop and stretched it out onto the floor.

The first big problem with this whole setup is that there is not enough room to evenly light the screen and talent. All of the lights would have to be placed too close. When setting up a green screen you want to place as much distance between your subject and the screen as possible. This prevents both light from the screen hitting your subject and shadows from your subject hitting your screen. Both will make pulling clean keys difficult. You also want your lights far enough from the screen to minimize hotspots and provide even illumination over the whole screen.

The second problem (which you can’t see) is that I had to place the camera in the hallway to properly frame the wide shots. While I set everything up, people kept asking permission to pass (and then wandered in front of the camera whenever I tried to shoot. ) The end result of this is that my on-camera performance is less than stellar.

The set-up was not ideal, but it was my best solution for this quick test shoot. I used Serious Magic Ultra 2 to do the compositing, so I figured this would also test its capacity for pulling keys from sub-par set-ups. 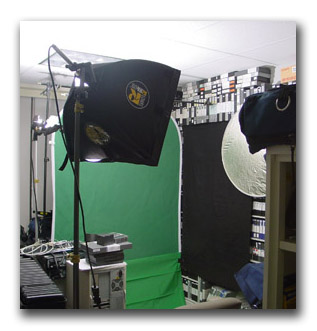 The second image shows the lighting setup. I used a Lowel Rifa Light for my foreground key light and a silver reflector to bounce fill from the opposite side.

The screen is lit by a Lowel Tota light shining through some tough spun diffusion material. Spill from this light was controlled by clipping some blackwrap to the light to flag it off from the rest of the room.

Hidden from view is a Litepanel LED light that I hung overhead to create a backlight. This is a great little light that you can stick just about anywhere. It dims without color shift and works on battery. I hang it from a boom arm when I want to drop a little light in without having to run cables. It also runs cool.

I recorded the footage with a Sony Z1U HDV camcorder in 1080i mode. The footage was transferred to my Adobe Premiere Pro 2.0 edit suite and saved to disk. The HDV footage was loaded into Ultra 2 for compositing.

Ultra 2 is a pretty cool little software package. It comes with virtual sets and background stills that you can drop behind your subjects.

Ultra 2 uses technology called vector keying to extract the subject from the background. You shoot a bit of footage of the screen without the talent, and then use that to let the program define the key. The program is looking for differences between this background and the image with the subject. It is sort of like screen correction in the Ultimatte process, but not exactly. This is supposed to compensate for unevenly lit screens and allow the software to still create a great key. The big limitation is you cannot move the camera. Ultra compensates for this by creating virtual camera movements to liven things up.

I found the key definition process in Ultra to be counter-intuitive. I have some experience pulling keys in After Effects and missed the ability to view the matte and fine tune my settings. The one click settings didn’t key out 100% of the background and I spent a lot of time tweaking the various sliders to try and figure out how to correct the problem. Most of the time my subject ended up partially transparent and I had to place a busy background behind it to determine when I had gotten the settings right. I know I need to spend more time learning the nuances of this software if I want to get the most out of it.

One of my full body shots just wasn’t working in Ultra. I used the Keylight plugin in After Effects to quickly create a key and then comped it over a pure green background. I output the results as an uncompressed file and reloaded it into Ultra to insert in a virtual set.

I was surprised that this clip, with the smoothest and most even green background, was hardest to key in Ultra. I don’t know why it was so much trouble. I had to use a lot of matte choking to get it to work. Ultra shrunk the clip down to fit in the virtual set, so you do not notice much.

For head and shoulder shots, this type of setup works fine. For full body you really need more room to separate the talent from the screen and to get the lights further away too. You can see my results below. It is not bad – not perfect either.

Ultra isn’t quite the instant virtual set dream I had hoped for. It does a fine job, but I think I’ll be more happy pulling most of my comps together in After Effects. The virtual sets look very computer generated. There is also no way to bring in your own 3D scenes. And, I just want more control over my final results (image sharpening, color balancing, and other effects.) Ultra is a more push-button tool for people with simple needs rather than a framework tool for power users.

If Serious Magic builds a suite of tools that let you design and create your own 3D sets (or integrate scenes from popular 3D packages), animate camera moves, and then seamlessly pull that together with your green screen shots, then they’ll be on to something. As is, I have an easier time getting what I want using 3D layers and compositing in After Effects.

Do you have questions about green screens and virtual sets that I didn’t answer? Drop me a note with your question and I’ll get you an answer.