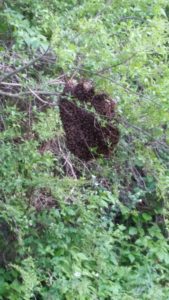 A big part of my interest in beekeeping is doing as much as I can for myself with available resources. I built my hive out of scrap wood. I also want to get my bees by capturing a swarm or cutting a hive out of an unwanted location. Last season I did a cutout, but the colony did not survive the winter. So now I’m trying to find a swarm.

In the spring, when colonies build up their numbers after the winter and store up some honey from the first nectar flow, it’s swarm season. When bees swarm, the queen and as much as half of the colony will leave the hive and look for a place to start a new colony. When they first leave, the swarm will temporarily settle someplace near the old hive – like in a tree branch, in a hedge, or on a fence. The swarm will stay there (a few hours or several days) while scouts go looking for a new home. When they find one, the swarm will move in and set up shop.

How To GetÂ A Honey Bee Swarm

There are 2 ways to catch a swarm. First, you can catch the swarm from their temporary resting spot. The other way is to hang a small bait hive in a tree near a place where swarms are active. The you wait for the scouts to find the hive and lead the colony to move in. I’m trying both tactics. 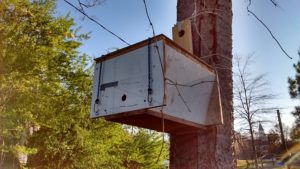 A few weeks ago I hung my bait hive about 10 feet up on the trunk of a tree near the edge of a wooded area. I used a little lemon grass oil as a scent to attract the scouts (during my research I learned that the smell is close to the pheromone that the bees use to signal others where the hive is located.) I also left a couple bars of empty brood comb inside for the same reason. I’ve been checking the box regularly, but haven’t seen any activity there so far.

While I wait and watch the bait hive, I’ve also placed a few ads online offering free swarm removal. I’ve gotten a couple leads, but the swarms were gone before I could get out to collect them. Timing is a critical part of the process.

The swarm catching process is not very complicated. You generally scoop or shake them into a box, close the flaps, and transport them to the location of your hive. Some people place the bees directly into a bait hive or nucleus hive and others use a plain old cardboard box. I lean toward the cardboard box option.

Swarming bees are in their least defensive state. They have gorged on honey in preparation for the move, they have no honey stores to protect, and their queen is safely nestled inside a great big mass of bees. If you are gentle, they won’t put up a fight. But, it is still wise to suit up with a veil and gloves.

If the bees are on an accessible branch, you can hold the box under them, grab the branch, and give a few shakes to dump them into the box. Sometimes you can cut the branch loose and then place it in the box. But, if the bees are in a locationÂ where those options are not possible, you mayÂ have to reach into the swarm with your hand and carefully lift away clusters of bees and then put them into the box.

If you are not able to get the entire swarm into the box at once, you may have to leave the box on the ground for a while and let the bees that fly off find their way to the box. If the queen is inside, workers will gather near the entrance and fan pheromone into the air to lead the rest of the colony to the box. If possible, the box should be left in place until dusk so that the scouts have time to return and find the box before you close up the entrance and move them to their new home.

This video gives a very good demonstration of the process:

Here is what I pack for a swarm capture:

I’ve got all my gear packed in a 5 gallon bucket and ready to go. It’s best to be ready because you have to move fast to get the swarm before it relocates to a new hive.

There is a bit of an adrenaline rush involved in the process of hunting bee swarms. It’s important that you don’t get carried away and take reckless chances in pursuit of a swarm. If the bees are in a dangerous location, it is best not to try and reach them. You can put a bait box close by and attempt to lure them in. But, a swarm is not worth falling off a ladder, a roof, or out of a tree.