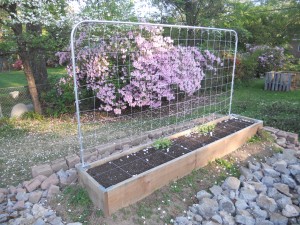 Farmer Andy has been busy again building trellises for the Seltz Raised-Bed Garden 2.0.

The Raised bed boxes on the north and east sides of the garden are designated for vine plants that will be trained up a trellis during the growing season. Our pea vines are already growing, so getting the trellises built was a high-priority project.

We wanted something sturdy that would last multiple seasons with little upkeep. So, I built our garden trellises using 3/4 inch electrical conduit pipe from the local hardware store. It is sold in 10 foot lengths and can be connected together using simple hardware and tools. 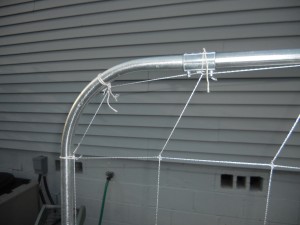 I used a pipe bender in the store to add a 90 degree bend to the tops of the pipes that would be located on the ends of the boxes. A simple pipe-cutter was used on location to cut each piece to fit. And, finally, I attached each vertical pipe to the box using pipe straps and galvanized deck screws.

The nylon mesh net tied to the frame was purchased in the garden department of the store. It is pulled pretty tight, so hopefully it will be strong enough to hold all the plants and fruits when we get to the heart of the growing season.

It won’t be long before the pea vines are tall enough to start training them up the trellis.

Other than planting, my next project for the garden is to finish filling in the path areas with crushed rock and put a top layer on the walkway (probably shredded bark mulch for this season.)

What do you think of the progress we’ve made so far? 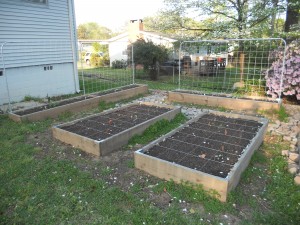 4 thoughts on “Conduit Trellises For The Raised-Bed Garden”