Farmer Andy is back at work again preparing for the spring planting in our organic backyard garden. 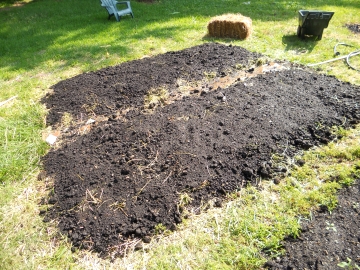 After we bought our house in Birmingham last spring we rushed to get a garden planted before it was too late. I was so busy renovating and painting the inside of the house that I didn’t have time to build frames for the raised bed garden Ellen and I were planning for the back yard. We just piled the new soil on top of the grass and started planting.

Our basic strategy then was to build up layers of straw, hay, compost, composted manure, and dirt (with some blood and bone meal mixed in) to create the foundation for our garden.

For the most part, this idea worked. We got the mixture a little to heavy on the nitrogen, so we got lots of leaves on the plants, but not as many veggies to eat as we would have liked. The yard also has a steep slope to one corner, so we had a few drainage issues as well. Not perfect but not bad for the first garden we ever planted. 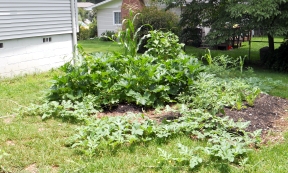 We got some decent results from this first attempt at backyard organic gardening. There were plenty of zucchini at the beginning of the season (but we over-planted and the various plants ended up shading each other out and they stopped producing.) Later we enjoyed swiss chard, beans, and lots of tomatoes. We even harvested a few tasty watermelons from our little backyard farm.

But, these last few weeks, farmer Andy has been stepping up his game. I went to the hardware store, bought some lumber, and built us some honest to goodness raised bed planting boxes.

There are four 12 inch deep boxes now for our garden. Two are 4 foot by 8 foot and will make up the main garden space. On the north and east ends of the garden are long narrow boxes which will have trellises behind them for climbing vines.

I set all of the boxes level to each other which means that the south east corner is built up nearly 2 feet.  I’ll be filling in the spaces between the boxes so that the working paths around the garden are level. I will build up gravel and then soil above to keep water from pooling on the path.

I still need to build up some potato planters along the edge of the patio, but we are ready to start mixing our planting soil and filling in the boxes. 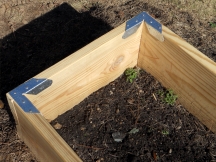 My design for these raised bed garden boxes was very simple. I used 2x12x8 floor joists as my timbers and galvanized nails and corner brackets to hold everything together.

I cut one joist in half and and used the short pieces for the ends of the box. The resulting boxes were roughly 4 feet by 8 feet. The narrow boxes had 2 foot wide end pieces and 10 foot long joists for the sides.

All-in-all, I’m very pleased with the way the garden is shaping up. We’ve had a few hard rains since the boxes went in and everything seems to be holding up well. As time and money allows, I would like to build a retaining wall around the outside of the garden and cover the walk path with paving stones to minimize maintenance. But, I think rain barrels are more important right now!

What do you think of the garden?