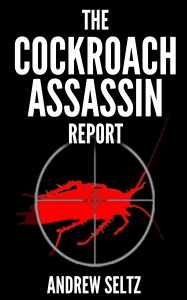 I have edited everything I previously wrote about eradicating cockroaches (along with some new research) and published it as a FREE online book.

Now, instead of piecing together my advice from the posts and comments on this blog, you can read everything you need to know in one place – a step-by-step plan is included. I call it the “Cockroach Assassin Report.” The book has been published as a stand-alone website with a table of contents and the full text. A print edition is available for people who prefer a physical book over digital books.

Read this Special Report at:
www.CockroachAssassin.com

My wife and I just moved into a new apartment in Manhattan (new to us, anyway) and discovered a little problem – ROACHES!!! The place isn’t overrun with them, but there are more than enough running around to make us freak out.

I didn’t discover the problem until I was painting the place before we moved in. There wasn’t enough time to bug-bomb the apartment before moving in (I needed every minute to paint and prep to get ready for move-in day.) So, I’ve had to take a multi-prong approach to ending the cockroach problem.

The first thing I did was spread Boric Acid along the baseboards, behind the refrigerator and stove, inside the kitchen cabinets and under the radiators. I’ve done this at other apartments and it seems to keep roaches in check. The powder stays active for a good long while, the roaches track it back into the walls (which helps kill them in the nests) and there is no awful chemical smell. In this case, the Boric Acid wasn’t enough. There were still roaches when the painting was finished and we moved in. So, I moved on to the next step in the plan – seal up cracks and holes and use aggressive poison sprays along the baseboards in select areas (we have a young daughter and don’t want her getting into the poisons and becoming sick so we are spraying in very limited areas.)

For a day or two it seemed like the roach problem was dissipating, but we woke up again to discover several of them crawling around the kitchen and later that morning, one crawled across the baby’s high-chair while she was eating. We may be making progress, but not fast enough. So I went a step further.

I bought a bunch of RAID Double Control roach baits to place all around the kitchen and bathroom. These also came with 3 special ‘egg stoppers‘ as well. The egg-killers involved some kind of liquid in a glass vial and a fabric pad to disperse it. You crack the glass and the liquid soaks into the pad. Whatever is in this liquid is supposed to screw up the roaches ability to reproduce. Once we get a handle on this problem, I’m throwing these out because I don’t want chemicals like that floating around my house any longer than necessary.(UPDATE: My position on this product has changed dramatically. I did more research on the chemical in these egg-stoppers while writing The Cockroach Assassin Report and discovered that it is both effective and safe. I read several University studies that addressed the safety of the active ingredient and now recommend it. But, these reproduction disruptors must be used with other products to eliminate an infestation. They are not a stand-alone solution.)

I also picked up a jug of bleach and am pouring bleach into the drains at night to keep the roaches from crawling up through the pipes at night. (We’re also regularly mixing a bleach solution in the sink to clean the baby’s toys until we are confident that the roach problem has been resolved!) The bleach stays in the trap in the drain to create a barrier that the roaches cannot cross. It also kills a lot of germs and leaves a stink in the room, so I put the drain plug in after pouring the bleach. I’m hitting the kitchen sink, bathroom sink and tub drains on my evening bleach runs.

My wife had used a device in a previous apartment that is supposed to send a magnetic charge through the wiring in your house which agitates the roaches and drives them out of the walls in search of other nesting spots. We searched around online and found a similar product at Amazon and ordered a couple. You just plug them into an outlet and it does it’s thing. If the device works at all, this will be a non-toxic long-term control tactic for keeping the roaches away. It can’t hurt (although the manufacturer says that the first few days the device is used, there will be more roaches in the house as they are driven out of the walls – I’ll be keeping the roach spray handy!)

While she was searching, my wife came across another product called Diatomaceous Earth, which is a non-toxic powder that kill roaches and other bugs. The powder is actually the fossilized remains of tiny phytoplanktons called diatoms which live in lakes and seas. The microscopic remains of these creatures have a jagged surface that scratches the roaches as they move across it which causes them to dry out and die. They also ingest the powder which does unpleasant things to their insides and kills as well. Like the Boric Acid, this powder is tracked back into the walls by the roaches and kills others in the nest. Unlike Boric Acid, it is safe around pets and humans (including babies) and does not lose potency over time.

I’m looking for a local supplier for the Diatomaeous Earth. If I can’t find one, I know it’s available on Amazon. My plan is to spread it around on the same places I have used Boric Acid and leave it behind the stove, under the refrigerator, and around the radiators. I’m also considering drilling some small holes in the kitchen walls in each stud cavity and blowing a mix of Boric Acid and Diatomaceous Earth inside to kill of any nesting problems around the kitchen. This is a pretty aggressive step, so I’ll wait and see how the other options work first.

Several non-toxic sprays have come up in my searches for roach killers and I might order some to keep on hand once the war is over. They seem to use either orange oils or mint oils to kill the roaches. Both leave a strong smell, but I think I’d rather smell intense mint than whatever is in a typical can of roach spray.

You can probably tell I REALLY DON’T LIKE ROACHES!!!! I’m on a mission (possibly a fool’s errand) to rid my new apartment of this filthy invasion. I think I’ve covered all my bases (we’re keeping all our food in sealed containers and being aggressively clean in addition to everything else.) If these tactics don’t work, I fear I might start tearing up the walls and floors soon, so wish me luck and leave a comment if you have any solutions I haven’t mentioned here.