It took two attempts, but I captured a swarm of honey bees from a tree behind the local elementary school and transferred them safely to the bait hive in my backyard.

A few months back I began to do some serious investigation into the prospect of keeping a hive of bees in my backyard. There are several beekeepers in my neighborhood, and the idea has been perking in my mind for a while. I don’t have any interest in commercial beekeeping, I just want to keep a colony and get a little wax and honey along with the pollination of all the fruit trees I’ve been planting. I talked about it with Ellen and we both did a lot of research. Ultimately we came to the conclusion that we could make this work.

It is easy to spend money on beekeeping. There are bee suits, veils, smokers, hive tools, and all the commercial hive components. You can easily drop a thousand dollars getting all the bits and pieces. Then there are the bees themselves. If you buy a queen with a 3 pound pack of worker bees you can easily drop another $150. My goal was to spend as little as possible until I know I want to do this long term.

I settled on a Kenyan Top Bar style hive because they are relatively easy to build from scrap wood and common tools. They are also less physically demanding to manage because you don’t have to lift a box full of frames as you inspect the hive and harvest honey. You can lift and examine things one bar at a time. You tend to get more wax and less honey in a top bar hive, but my girls are already scheming to start a business selling hand dipped beeswax candles.

The first step was to build a bait hive and put it in the back yard to try and capture a swarm. I worked out the basic dimensions and built one using shelving board and a bit of plywood – all scrap lumber from my stash. This is just a shorter version of the full sized hive I’ll be making next. Once I have an established colony, I will transfer them by dropping the bars from the bait hive to the full sized hive.

Time is a precious commodity these days, so I don’t intend to make the large hive until I know I need it. I put the bait hive in the yard and waited. Waited until last week anyway. My wife was picking the kids up from school and got into a conversation with a teacher. The subject of bees came up and the teacher mentioned a small swarm was in a tree in the back of the school.

The swarm I found was very small. It took me a while to locate it, but I eventually located them. I grabbed my hive and a step ladder and set out to catch them. The first attempt didn’t go so well. In my excitement to get some bees, I didn’t think the process through clearly. I decided to bring the hive up to the bees and brush them into the box with a gloved hand. It sort of worked.

I took half the bars off the bait hive and carried the box up the ladder. But, when I swiped the bees from their branch, I bumped the box and all the bars fell into the box at the same time that the bees got really unhappy.

I was only stung once in the process, but eventually I got the bars back on the hive box and decided to leave the hive under the tree in hopes that the rest of the swarm would come down and get inside.

I want back a few hours later with a cardboard box and tried to get as many of the rest of the bees as possible from the tree. This process was much smoother, but I still didn’t get the queen. I brought the hive home and put it in the back yard. But, by the next afternoon, the bees left. Some went back to the school and others went elsewhere.

The swarm regrouped in the same spot at the school. The next day went and made my second attempt to capture the swarm. This time I was much better organized. I brought a soft brush and a small cardboard box. I also went later in the evening when the bees were much less active. 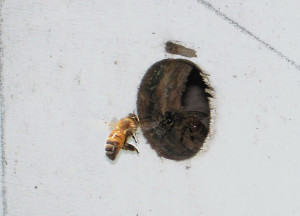 I’m writing this post a little more than 24 hours after capturing the bees for the second time. The bees went a whole day without abandoning the hive, so I think I have the queen. It’ll take a a few more days to make sure they really settled in.

The swarm I captured the second time was very small. I’m not sure if there are enough bees to survive, but I’m rooting for them and hoping for the best. I’ll keeping watching the hive for activity, but I won’t open and inspect it for several weeks until I know the bees are established.

Watching the bees is fascinating. I spent hours to watching them go and waiting to see if the come back. If all goes well, I will start working on building the full-sized hive soon. I’ll also need to think about getting a few extras like a bee suit, a smoker, and other tools. I’m also planning to take a beginning beekeepers course at the local library to learn more about caring for the bees and to meet some other folks who are into keeping bees.

For now, I just keep praying that my little bee colony makes it.