Last night was cornbread and chicken soup night at the Seltz house. I get lots of compliments on my cornbread, so I took a few notes and decided to share the recipe I use.

I married a Southern girl and use her momma’s family recipe – with a few tweaks to make it my own. So, here are the basics. 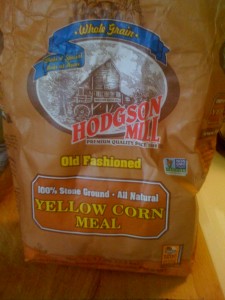 Since becoming a stay-at-home dad I have made cornbread more times than I can remember. The keys to success that I have discovered are picking the right corn meal and baking in a cast iron skillet.

The combination of masa corn flour and corn meal I use are the result of trial and error. I’ve been trying to find a source of regionally produced corn meal that isn’t made from genetically modified corn. That is becoming a big challenge. The Hodgson Mill corn meal is non-GMO, but it’s a little too course. 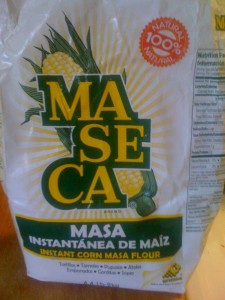 So, to keep from wasting a bag of corn meal, I cut it 50/50 with masa corn flour (which is too finely ground to use by itself.) Mixed together they are pretty nice.

Pre-heat your oven to 425 degrees.

Start by mixing the dry ingredients in a bowl with a fork. The goal is to blend the salt, baking powder, the corn meal, and the corn flour as evenly as possible before mixing in the wet ingredients.

Next, I add the eggs and oil and mix them in with a fork. Once I’ve get them mixed together as much as possible, it is time to add in the milk. 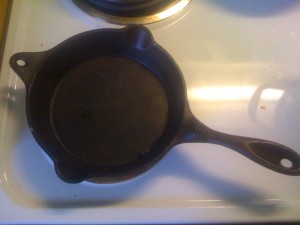 Before adding the milk, coat your skillet with a little oil (sometimes I use butter) and place it on the stove over medium heat to warm up a little.

Buttermilk is the best flavor by far, but regular whole milk will do the trick (I don’t like the results with low fat milk.) My recipe calls for 1/2 cup of milk, but I never measure. I add some in, mix it with the fork and add a bit more until the mixture is like a stiff pancake batter. It’s also important to get all the lumps out. 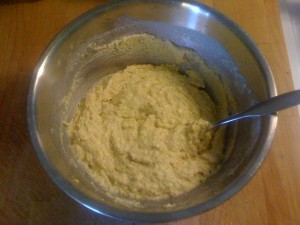 When everything is well blended, turn off the stove burner and pour the mixture into the skillet.

Pop the skillet into the oven for 40 minutes until the top of the bread starts to brown slightly.

Remove the bread from the skillet and cool for 5-10 minutes on a wire rack. Serve warm with butter.


The girls and my father-in-law are partial to drizzling a little molasses onto their cornbread. I just like to crumble it up in a bowl of soup.