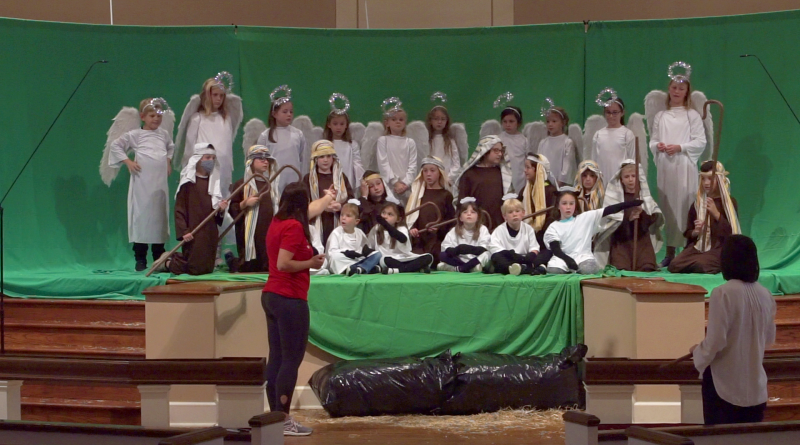 For the second year in a row Bluff Park UMC’s children’s ministry decided to host a virtual Christmas Pageant. The video was shot before Thanksgiving, so we didn’t have major masking and social distancing issues to contend with during the shoot. The project was shot in the main sanctuary of the church. We decided to cover the entire back of the stage with green screens to give us maximum flexibility in the edit to create interesting backgrounds.

We used 9’x15′ Neewer Green Screens for the backdrops. The fabric in these has a significant amount of polyester which makes them crease and wrinkle less, but gives them a slight sheen which can cause unwanted specular reflections that won’t key out. I normally use cotton muslin screens, but this was the cheapest option and worked well enough. The end credits have a timelapse of the shoot that gives a pretty good idea of the setup.

The intro and outro clips where shot in my office green screen studio which has a permanent screen on the wall lit with a 3-light softbox kit to light the talent and 2 wand/stick style LED lights to light the screen. I also use a Zoom H1 audio recorder and Takstar SGC-598 mic mounted on a boom arm for the audio.

This was a stripped down super low budget project. I didn’t do much lighting for the parts with the kids. I used the available room light and brought in a couple Lowel Omni lights with umbrellas from my old light kit to add a little fill light on the sides that matched the incandescent lights in the room. My main camera was a Sony a5000 with a vintage lens. There was also a PTZ Optics remote camera mounted in the room that I used for a backup recording and I had an old Canon Vixia hf r500 camcorder that I used to grab some of the closeups.

One of the challenges with projects like this is that you push a lot of the hard work from production to post production and end up with some very long hours in the editing room. Every single shot becomes an effects shot. Each of the angels was shot separately and then combined together in one shot – that’s 21 clips that needed to be masked, chromakeyed, color corrected, and positioned into the final composition. The clip lasted a few seconds but took nearly 4 hours to composite.

Green screen is often viewed as a shortcut, but I find it nearly always takes as much time or more to created compared to building and lighting a set. You can save money on lights and crew during production, but you always pay with time in post.

I did my editing in Adobe Premiere. The music mix was done in Audition, the backgrounds were created in Photoshop, and all of the compositing and effects were done in After Effects.

There was no question that my green screen elements were going to be low quality due to the chaos of working with kids and the limitations of the lights and green screens we used. So, the UltraKey tool in Premiere was not going to give me good results. The KeyLight tool in After effects has much better controls for working with difficult footage. I used the intermediate output from KeyLight (no color correction or spill control) and used the Advanced Spill Suppression tool and Lumix Color tools to fine tune the shots for compositing.

I spent about 4 days doing the compositing and editing in total.

Working in a church sanctuary meant I had some obstacles I had to deal with. The foreground altar rails were the biggest challenge. They were in every wide shot, and sometimes kids were standing behind them.

When no kids were behind the rails, I just sent a still frame to Photoshop and painted them out. Other times I created foreground elements (like hay bales) to cover them up. But, in one shot I animated a resting cow using the Puppet tool and a still shot of a cow laying down and pasted that over that pesky altar rail. I love those cows.

This video was very well received. We posted it to Facebook and YouTube. The response was even better than the video we did last year and people have been sharing it though the whole Christmas season.

The finished product is never as good as what’s in my head, but I think this turned out well. If only I had a bigger budget and twice as much time!

Do you have any questions or comments about this project? Leave a comment below.